Loxley Savage is from a town in Northeast Ohio. When she’s not writing, she’s avoiding stepping on her daughters LOL dolls while drinking coffee. She loves reality tv shows and playing video games with her husband.

I’ve been called all of these, except my true name—a secret I’ve never learned.

I was groomed for a life of captivity; brought up as a slave for the exclusive club, Exotique. I’m desired for my body and thirsted after for my addictive blood. I’m stripped and restrained while male after male acts out his twisted desires.

I’m constantly at war with myself while my inner beasts battle for dominance.
The succubus half of me craves these sessions. She longs for the toxic mix of pleasure and pain, feasting on the release of others.
My phoenix half lies dormant. She’s a silent presence who shudders at the crack of a whip, and shies away from the cruel hands of my handlers.

While I suffer through countless degrading sessions, somewhere far away a trio of Phoenix warriors are sanctioned by their King to find and rescue me. Will they succeed? Or will one of my handlers finally take a session too far?

Their race is dying, but so am I.

Bound for Blood is book one in the Feathers and Fire series. It is a Dark, Paranormal, Reverse Harem romance. The final book ends with an HEA. Expect dark elements and explicit scenes. If such scenes might trigger or offend you, please do not buy this book.

I’ve spent my entire life pretending to be someone I’m not.

Forced to hide in the slums of Tenebris from those who would enslave me, I carry the Golden Curse that has been passed through my family for generations. This affliction makes me the perfect breeder to carry the offspring of the Kings of Emperia and their elite warriors.

I’ve tried everything to avoid this fate, until one careless mistake lands me in the hands of my enemy.

Unfortunately for King Leonidas, my name is Saphyre Aurelian, and I’ll make him regret the day he chose me as his breeder.

WARNING: Saphyre is a DARK Reverse Harem Fantasy and is for mature audiences only. This is NOT a romance. This book is about one woman determined to stand up and win against injustice. Contains scenes that may be upsetting for some, such as sexual violence and torture.

Growing up beneath the firm grasp of the evil Kraken Queen is all Lyn has ever known. Under her harsh gaze, Lyn’s every move is watched and scrutinized, waiting for her to make a mistake. Should she place even a fin out of line, she will suffer the wrath of the Kraken’s Kiss.
Unable to endure the Queen’s envious stare any longer, Lyn escapes with the help of her only friend.
In her plight for freedom she flees to the one place she feels safe, her island. Unbeknownst to Lyn, two strangers await her there, determined to change her fate.

Meanwhile, a war between the underwater kingdoms escalates as the opposing princes continue to search for their missing mate.

Will Lyn find her freedom away from the tentacles of the Kraken Queen? Or will she forever be ensnared in the constant shifting of the twisted tides?

*Twisted Tides is the first book in the Wicked Waves Series. This is a medium burn, fantasy, reverse harem romance. This book is for adult audiences only. There will be an HEA at the conclusion of the series.* 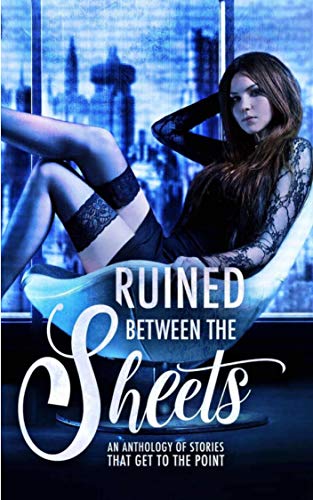 The fun doesn’t stop when the world ends.

Slip between the sheets, or anywhere else that’s a flat surface, with these tales of seduction and destruction.

Ruined Between the Sheets is full of ultra steamy complete reads. The characters may or may not be familiar, but the story won’t leave you wanting.